Feedback is always appreciated, especially because it induces progress. And Xanadu designs is all about progression – no matter the condition.

The Atomic Rocket (family 1) has been receiving many different reviews. It’s not a board for beginners. Like its description says, “The Atomic Rocket will hold very well in hollow waves, something you may not expect until you set your rail and stall under the lip. The foil of the board, and the reverse tear drop outline makes it easier to get in to waves, which allows you to find your line early, setting yourself up for sections faster than you will expect.”

We were happy to receive an email from our customer in the East Coast and we’d like to share with you, in case you’re considering adding this eccentric twin fin on your quiver.

“I just wanted to give you some happy customer feedback to tell Xanadu on the Atomic Rocket we ordered. I gave it to my son Jack who’s 22 and a very good surfer. He surfs in the North Carolina Outer Banks (OB) regularly which I think might not be so well known on the West Coast but I’ve been all over the world to surf and I think the OB is one of the best barrelling beach breaks I’ve seen, thick and square and can get very heavy. Jack has been going on how perfect the Atomic rocket is for that type of wave. Some of the things he’s been saying that you might find interesting is that the board is one of the few boards he’s had that actually surfs exactly like its description.

He said it takes a bit to figure it out because it doesn’t catch waves early very well and is slow when the wave is flatter, unlike a typical twin fin. What the board loves though is late, critical take-offs, it fits in the curve of the wave. He’s constantly making late take-offs under the lip where his friends are asking how he could possibly have made it. He also said that if you are ahead of the barrel the board naturally slows down without doing a check turn until you are perfectly in the pocket and then comes to life. It does exactly what it says, it’s fast in the pocket, fits under the lip, and will put you exactly where you need to be. People should not expect it to surf like any other twin fin they have ridden (we surf a lot of twins!), it’s a different dedicated tool which dominates at what it’s meant for.” – William Gebhardt

Thanks Bill for sharing it, and allowing us to share your feedback to our friends! There is no better feeling than knowing that we were able to provide a tool that allows you to do exactly what your mind wanted to do on a wave (Xanadu words).

“I don’t call it buying surfboards, I call it investing in my happiness”. 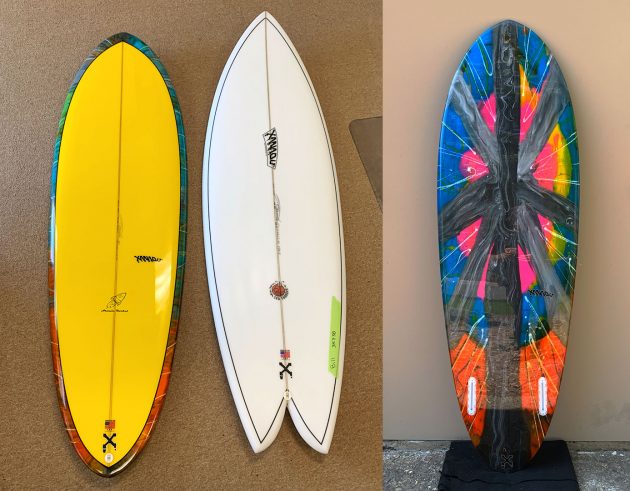 Check out our dealers close to you or fill out the custom order form for quotes and questions.

Have you surfed a wave pool?

Xanadu met with Alex Ribeiro this weekend for a surf session in Guarujá, Brazil.

The last episode of Interview with the shaper

Watch the episode 4 of Interview with the shaper

We just launched the episode 3 of the Interview with the shaper!

Inside the shaper’s mind – Episode 2 is now on!

Inside the shaper’s mind – Watch the first episode!

Welcome to the team – Rodrigo Saldanha

We want your picture surfing on Xanadu Surfboards!